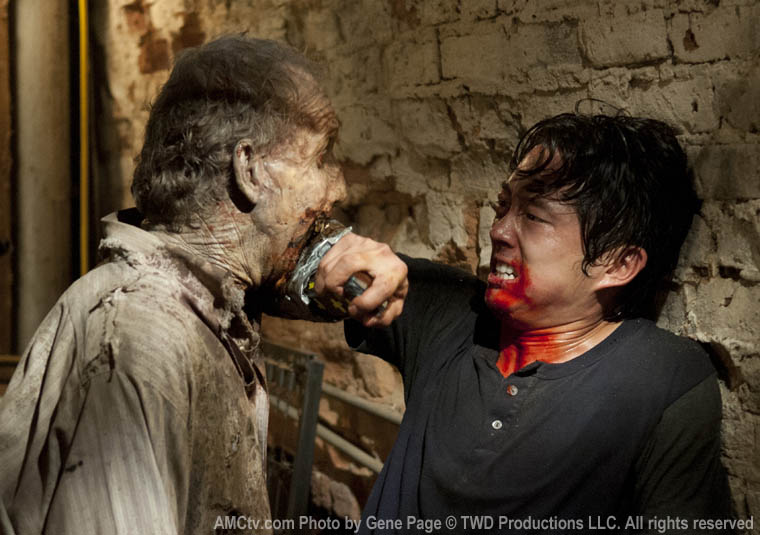 First off I would like to say well done Glenn! This week’s episode of The Walking Dead was a very intense ride as characters fought to survive and protect those they love. After a mixed episode last week, this week’s episode certainly paved the way for the mid-season finale and had some big turning points for the series.

To start let’s talk about my favorite part of this episode. After Glenn and Maggie were kidnapped my Merle and brought to Woodbury for questioning at the end of last week’s episode I feared the worst. The questioning and subsequent torture sequences in the comic books are some of the most chilling scenes the series has offered, and so I wondered how they would bring this to television, especially now that Maggie is involved instead of Rick and Michonne. While these sequences did not delve into such horrific and gory matter, they were never the less effective. It was great to see Glenn fight for his life as well as for his loved one. Actor Steven Yeun did a wonderful job in these sequences showing his deep anger but also his fear of losing Maggie. Plus how awesome was it to see him put a chair leg through a walker’s skull as he screams in defiance but also in fear. Above all this showed how far Glenn has come in this ruthless world, and further proved why he is one of my favorite characters. While he may not have feared for his life in the beginning of the series when he was a runner, now that he has Maggie he has everything to lose and so will do whatever he can to survive and protect her.

Meanwhile it was horrible to see the little game that the Governor played with Maggie. Thankfully the sequence did not go as far as I feared it would but still had quite a potent impact, especially when the Governor slams Maggie onto the table. “Do whatever you’re gonna do and go to hell,” she whispers to the Governor. Like Steven Yeun, Lauren Cohan was simply astounding in these parts, but overall came to cave in to the Governors questioning, and with good reason as he had a gun pointed to Glenn’s head. I absolutely love Glenn and Maggie as a couple and to see them like this was heart wrenching. As terrible as it sounds, I hope Glenn and Maggie come to deliver justice on the Governor and even Merle, and make them realise just how harsh this new world truly is.

As Glenn and Maggie had their little date with the Governor, Rick and the gang met with the prisons newest inmate- Michonne. It was great to see Rick and Carl struggle to save her as she passed out from loss of blood, plus it gave Carl another awesome action sequence. Man can that kid shoot now. Although I would like to see Michonne speak up more, instead of always being the brooding, silent type, I appreciated it in this instance. After everything in Woodbury, I can see why she would be untrusting. It was great to get a fresh opinion on how Rick and his group operate in comparison to the Governor and Woodbury, as viewers came to see Rick’s operation from the eyes of Michonne. The way they help each other out, and how they are a make-shift family really stood out here as she watched the group from her cell.

Michonne at the prison was not all for naught as it turned out, for she came to lead Rick to Woodbury, but not on the safest road. When they got surrounded by the walkers and forced into the little shack, it felt like a ‘been there done that’ scenario, like Rick in the tank or Shane and Otis. However, it was interesting to see how they dealt with the crazy hobo that lived in the shack, and by dealt with I mean stab him in the back with a katana and toss him to the walkers in order to escape. It was interesting to see how quickly Michonne responded, and how little of a reaction Rick had to this homeless guy’s death. It’s kill or be killed- a statement that both Rick and Michonne have come to fully comprehend.

While the bait and escape scenario provided a darker reality to this already bleak world, it was very exciting to see Rick and his band of would be soldiers make it to Woodbury. I like the reverse situation here, for unlike in the comics, Rick is taking the fight to Woodbury rather than the other way around. It will be interesting to see how this battle plays out next week and to see where allegiances stand, especially with Merle on one side and Daryl on the other.

A final note must be made about Carol and Andrea. After last week’s absurd discovery of Carol, it was nice to see her take responsibility over baby Judith, who Carl named. It also makes me wonder if the writers kept Carol gone  for so long as a ploy for Rick and Carl to have to explain and  relive the death of Lori once again. If so this could have easily been better handled. It was also nice to see Andrea play a different role aside from being completely oblivious to what was going on around her. While her help into the science of the walkers was a nice change of pace, and a nice told you so moment for her, it still does not make up for her weeks of ignorance. Hopefully in next week’s episode, when she sees who the enemies of Woodbury actually are, will she come to change her mind.

A very solid episode, with some great character moments for Glenn and Maggie, “When the Dead Come Knocking” was a great episode to lead into the mid-season finale. With both groups striving for each other’s territory it will be interesting to see how this meeting works out. Something tells me though that there won’t be a welcoming party.