The opening of Far Cry 3 is one of the strongest video game openings I’ve seen in quite a long time. You play as Jason Brody, a college kid with too much money and no drive to do anything meaningful in his life. While on vacation, Jason and his friends are taken captive by slave traders, led by the menacing Vaas Montenegro. The opening cutscene details the capture of these spoiled rich kids and how crazy and truly frightening Vaas can be. Once free from captivity, the story takes a nosedive with a bunch of meaningless subplots and a heavy reliance on the uninspired, frequently used video game trope of drugged out hallucinations to deliver plot points. At first, the story seems to be going someplace totally different and crazy, but it turns out those little nods at Jason’s insanity never really go anywhere.

Suddenly the plot begins to meander and the main story threads laid out from the opening cutscene are wrapped up hours before the game’s story actually concludes. This wouldn’t be so much of a problem if I weren’t so interested in Vaas as a character, Jason’s friends, and his constant struggle with who he really is. The main story missions devolve down to corridor shoot-outs and turret sequences far too often. In one very out of place sequence in the story, the game takes on a treasure hunting Uncharted feel that just doesn’t work within the game. There are a few exciting missions where you burn an entire crop field, or sneak into an area and take pictures before blowing up a truck with an RPG, but these are few and far between.

When not taking on missions to save Jason’s friends and stop the slave trading empire, there is an entire island to go out and explore. Radio towers line the island, giving players an Assassin’s Creed style landmark used to fill out the world map. These radio towers are miniature platforming sections that are all different, and all fun to climb. Once you’re at the top, you might see an enemy controlled outpost in the distance, zipline off the tower and sneak through the forest near the outpost. At a good vantage point, you can use Jason’s camera to canvas the area and mark all the enemies inside. Now it gets interesting. 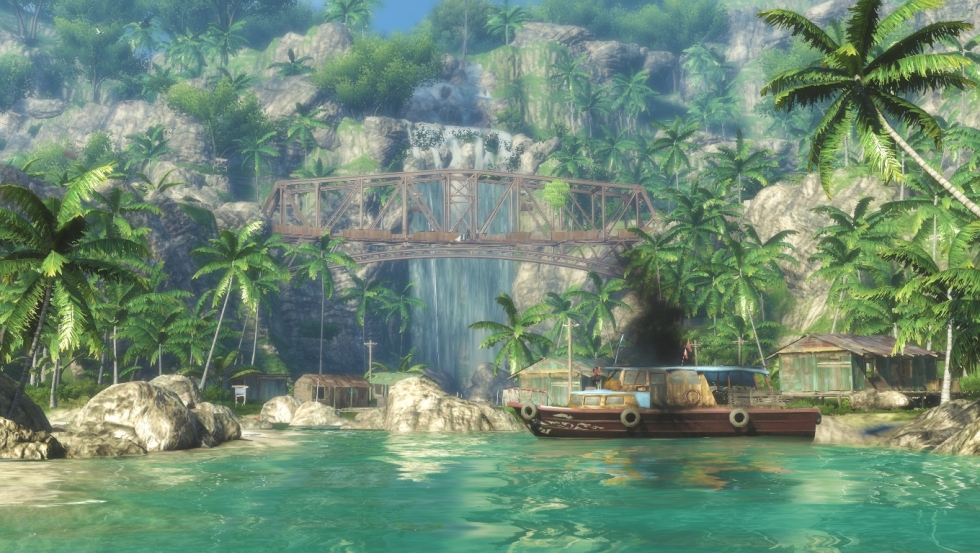 You have full control of how you want to take out this outpost. If you go in guns blazing, they’ll call reinforcements and you’ll have more enemies to deal with, but that’s okay because you laid mines down on the road so their vehicle immediately blows up as they arrive. If you try the more stealthy approach, you can silently take down all the enemies in the area without anyone noticing. Or, maybe you see a caged animal in the camp; shoot the door open and watch as whatever animal devours its former captors. These outposts are easily the most fun and exciting to tackle in the game.

There are a wide variety of animals to hunt within the game, each behaving as a predator or a docile herbivore. One of the most impressive parts of Far Cry 3 is how the AI behaves within the world. You’ll come across tigers hunting goats, or a pack of boar being attacked by a wild bear. As man, you are the most dangerous predator and will hunt and skin all of these animals in order to upgrade your equipment slots. If you want to carry more than one weapon, or find yourself constantly running low on ammo, then you’ll need to hunt the various animals and craft better holsters and bags from their skins. It is the most rewarding and meaningful hunting I’ve experienced in a game. I would constantly find myself disregarding the main story and instead hunting dingoes and leopards with Molotov cocktails because lighting an entire field on fire is just too much fun.

In addition to a crafting system for inventory upgrades, Far Cry 3 has a leveling system to make Jason that much more of a badass. You’ll gain XP by killing enemies, taking on the side missions, and claiming outposts. Each skill nets you a perk like raising your health, making your footsteps quieter, or allowing you to chain multiple takedown moves.

Far Cry 3 also has a full 2-4-player co-op mode that isn’t very good. The missions drill down to standard FPS shooter fare with too many claustrophobic and tight corridor battles, without any of the open areas where the single-player game excels. Each mission is tied together by a boring story of four random people that just like killing pirates. Far Cry 3 also has a full on multiplayer mode as well, but it’s boring, unnecessary, and doesn’t do anything to stand out in the crowd. You have the standard leveling system with various weapon and perk unlocks, and the standard multiplayer modes like team deathmatch and domination.