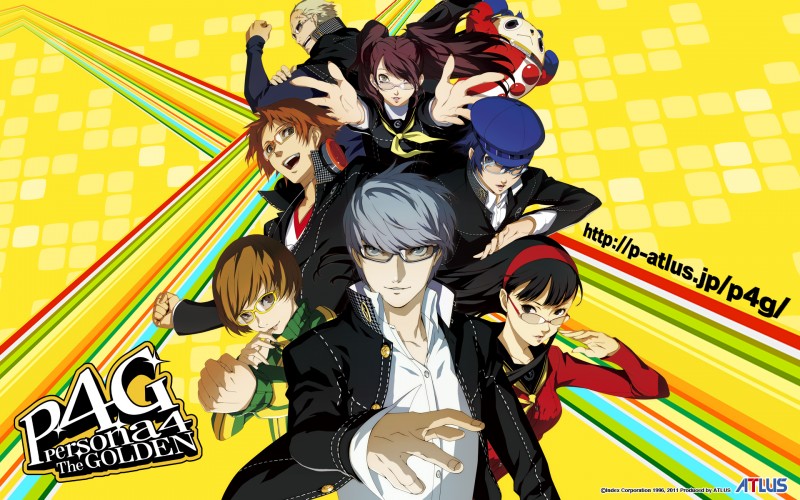 Ever heard of the Midnight Channel?

Here’s how the story goes: if you stare into a TV at midnight while it’s raining, your soulmate will appear on the screen. They could be anyone, but they’ll definitely be someone from this sleepy countryside town. Also, everyone who appears in it turns up dead soon after, their corpse hanging from a telephone pole.

Persona 4 Golden is at once an exciting and intimidating game to review, because it’s bursting at the seems with content and character. Developer and publisher Atlus has taken a game that already ran a normal player anywhere from 60-100 hours, and expanded every part of it. Previously clunky systems have been polished to perfection, and there’s a wealth of new content, ranging from a smattering of new events and story beats to two new social links and a dungeon. I’m intimately familiar with this game and its systems, and I was able to get through the game in 77 hours. Your mileage may vary, but I suspect a lot of people will sink 80+ into this absolute beast of a game.

I’m not going to have the time to really explain everything going on in this package, so I’ll take a broader approach. If you have any interest in RPGs or story-driven games, you need to play Persona 4 Golden. Immediately. Go ahead, you can start now. I’ll wait.

Golden is a game of systems, each with their own level of complexity. These systems overlap and interlock in a lot satisfying ways. To best understand what’s at work in this game, you’ll need to have a grasp on two concepts: Persona fusion, and social links.

Your time in Golden is split between two discrete worlds. There are dungeons, where you do your turn-based RPG combat, and the town of Inaba, where you talk with people, go to school, and work at part-time jobs. The majority of the game is uncharacteristically spent in Inaba. This a true story-driven game, where you not only spend more time watching the narrative unfold, but where you want to spend more time watching the narrative unfold.

This isn’t to say the combat is lackluster, because it’s actually one of my favorite RPG battle systems in recent memory. It’s all based around exploiting enemy weaknesses, like a significantly improved and more nuanced version of Pokémon. It’s incredibly strategic too, where you can generally work your way out of a messy situation with careful planning, rather than brute strength. Death is always a moment away, even on the normal difficulty setting, and even the most basic enemies can kill you if you’re not careful. There are very easy and very hard modes exclusive to this re-release, which is a smart move for both over and under-experienced players.

As the silent protagonist of the game (whose name is officially Yu Narukami), you have the ability to switch between a variety of Personas at any time. Personas are monsters that represent a person’s insecurities and weaknesses, and they can be trained to work cooperatively with the person to whom they belong. There are over 100 Personas to collect, each with a variety of different abilities. You get most new Personas by fusing them together. You can fuse upwards of six Personas together by the end of the game, and different combinations yield different results. It’s an addicting system, and one I sunk hours of my playtime experimenting with.

Each Persona is of a certain type, known as “arcana.” Social links are the meat of the game, where you spend time getting to know a specific character in your squad or person in town. Each social link has an arcana attached to it, and that plays back into the Persona fusion. For example, if I level the Fool social link, then I’ll get an EXP bonus when fusing Personas of the Fool arcana. There’s a tangible benefit to hanging out with people, and that’s one of the reasons doing it is so much fun.

But that hook isn’t integral to Golden‘s success. The story is a masterclass of slight of hand and red herrings, where incidents thought to be irrelevant are made meaningful, and vice versa. The game builds an impossible amount of questions, and answers them all with a logic and fluidity that’s dazzlingly clever. The story also has some very serious metatextual implications for the attentive player, but it works fantastically when presented straight, too. The two new social links (one with meaningful new character Marie, one with bumbling young detective Adachi) are more than just shoe-horned in; they clear up parts of the existing story that were obscured otherwise, and are impressively well-integrated into the flow of the game.

That’s true of all of Golden‘s many additions. Several new events, ranging from the forming of an impromptu band to a skiing trip, all take place at different points in the game. They’re seamlessly added so that it feels like they were always there. One of my major complaints with the original game was that you could get a girlfriend, but there was never a real payoff, or any amount of noticeable extra time spent with said girl. Golden fixes that as well, adding in a ton of one-on-one events with you and your main squeeze.

I’d remembered finding Persona 4 emotionally impactful, but I guess I forgot just how elegantly this game handles many sensitive topics. Characters in this game grapple with all sorts of problems, including, but not limited to:  the death of a parent, the impact of celebrity on a child, sexual confusion and denial, and the media’s glamorization of tragedy. The topics are heady but never over-bearing or preachy, mainly because the characters speak so earnestly about everything that’s happening. It’s a forward thinking JRPG story, and one that trades up high fantasy nonsense for a grounded, relatable, and affecting story. Golden is also an extremely funny game (one of the funniest ever, for sure), but in a very casual way. It never tries too hard to induce laughs or tears, though it most certainly does.

Persona 4: Golden is the kind of game that will inspire serious conversation and bickering over its mythos, characters, and themes. Everyone will have a favorite team member, and everyone will defend said character to the death. I’m partial to Chie, the spunky, steak-loving girl with a femininity complex, but I wouldn’t fault anyone for liking another character more. This is because Golden has arguably the strongest ensemble cast in video games, and just like in something as acclaimed as Mass Effect, the disparity between players’ opinions is half the fun. This game is like a season of a television show, not just because of its length, but because of how involving it is, and how well every character is drawn. It’s one of the best paced games I’ve ever played, and one that is entirely consistent in its quality the whole way through. Atlus has added nothing here I don’t love (save two creepily pandering cutscenes that stick out in the crowd), making it easily the best enhanced remake of all time. It is, without a doubt in my mind, the greatest JRPG of the past ten to fifteen years.

Long story short, maybe you should try out that rumor that’s been going around. You know, the one about the Midnight Channel?