The Road to War is Paved 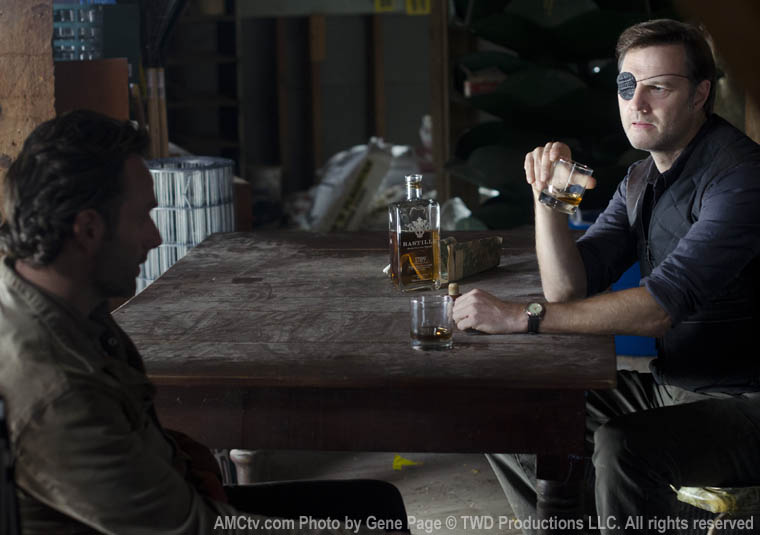 After last week’s astounding, character focused episode, it was unfortunate to see “Arrow on the Doorstep” return to the unfocused conflict between Rick and the Governor. While it did set up the final events leading to the end of the season, “Arrow on the Doorpost” felt forced and a way to progress the inevitable, and likely bloody, battlebetween the Prison and Woodbury.

It was immediately evident that the writers knew they needed to move the plot along. Using Andrea as a ‘middle-woman’ was a good choice, and the most positive action this character has done so far this season. Unfortunately, Andrea surmounted to little else in this episode, but her allegiance may quickly change after Rick and the Governor’s meeting.

The meeting between Rick and the Governor  fell flat for a number of reasons. For one, the beginning was very un-suspenseful as viewers could guess why Rick and Daryl were going to some abandoned farmhouse. They really tried to make the Governor menacing in these early scenes, as he looms in the shadows. Yet any sort of possible threat from the Governor was immediately ignored as he came to tell Rick the sob story of how he lost his wife. Once again the writers have come to focus on the charming side of the Governor, rather than the evil we have seen in early episodes. They even had the proper setup for it, showing that the Governor had taped a gun to the table. Yet did he pull it out, or try to harass Rick. No instead he tried to manipulate Rick with sympathy. This would have been a great opportunity for the writers to demonstrate what a menace the Governor can be. I was expecting the Governor’s men to surround the building and kidnap Daryl and the others that came with him, or even for the Governor to do something to Rick, perhaps a memorable moment from the comic books. Yet the Governor came off as more charming than menacing, as if he was trying to impress Rick on a first date.

Another reason why this meeting did not work was because of the Governor’s demands. Did he want the prison? No! Did he demand Rick begin serving Woodbury of pay the price? Of course not that would be absurd! Instead all he asked for was Michonne. In short the only reason as to why Michonne and the Governor were introduced this season was to have some sort of revenge story between the two. Not because they are great and diverse characters, but because the Governor is a tiny bit upset that he lost his walker daughter, and an eye. Finally the true plot of this season is revealed, but in the end I wish it had not been.

While Rick and the Governor’s meet up fell flat, to say the least, the interaction amongst the Governor’s men and Rick’s men was quite interesting. It was nice to see the character of Martinez explored a little more, for he is quite an interesting character in the comics. I really enjoyed how both Martinez and Daryl came to realise how similar they are, and it was rather humorous to see two badasses have a walker kill competition. More importantly though, as two respective right hand men, it was sad to see them realise that the negotiations between Rick and the Governor would not workout, nor will they likely see each other again on such pleasant terms. In another life, you can see Daryl and Martinez being friends (or maybe a badass buddy cop duo who don’t play by the rules), but likely they will now be pitted as enemies.

While Daryl and Martinez’s interaction served an interesting purpose, it was also nice to see Doc Milton and Hershel, two very dissimilar people, come to share a common bond. Of all the people, well aside from Maggie, Milton feels like one of the only people to have an interest in Hershel’s accident. Milton’s passion as to how Hershel survived being bit, and his scientific inquiry on how to help others survive being bit, made me actually appreciate a character who has otherwise served no purpose this season. He seems like someone who truly cares, but does not know how to act upon it without reverting to his awkward, mad scientist self. I only wish they would have had more character moments like this for both Doc and Martinez, for it would have made their characters all the more intriguing, rather than having only these brief glimpses of their character.  Sadly it seems that they will be cannon fodder before too long, as Rick and the Governor plan for war.

The episode came to a close as both parties left, and returned to their camps. As the Governor made plans to eliminate Rick no matter what, it finally dawned on both the Milton and Andrea that perhaps the Governor cannot be trusted. Yet, it is concerning for Milton appears more ready to attack the Governor than Andrea. Hopefully this comes to change next episode and both Andrea and Milton devise a plan to eliminate the Governor.

As the war between the two camps begins, Rick came to give those at the prison a very powerful monologue on his plan to attack Woodbury. However, this came to be overshadowed by Rick revealing to Hershel that he plans on giving Michonne to the Governor. After coming to trust her last week, Rick has a tough decision to make. To protect the lives of many, is Rick truly willing to sacrifice the life of one individual? At the beginning of this series I would have said no, but now I am not too sure.