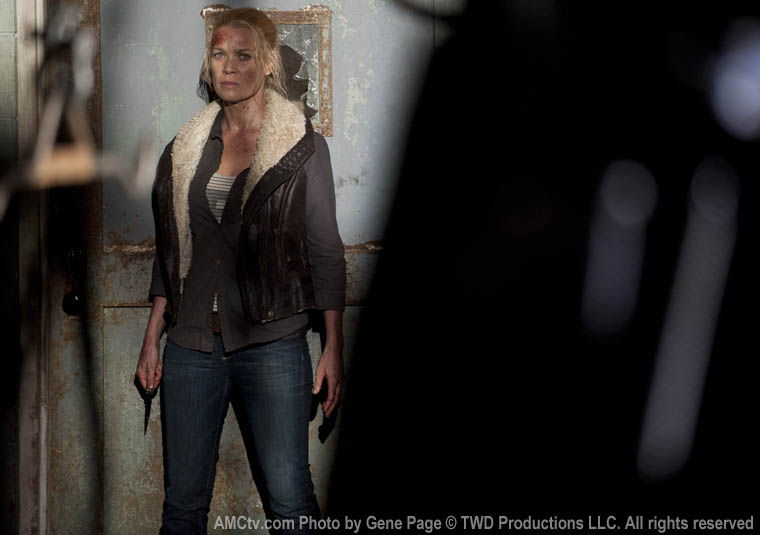 Well this episode certainly has been a long time coming. Since the beginning of the season, Andrea has continuously, and flawlessly, given in to the Governor and his actions. However, “Prey”, sought to change that with Andrea questioning his motives and his plans for the prison. Yet what should have been a big moment in the series came to feel a little deflated, for Andrea’s decision comes far too late in a season in a season of half-cocked actions and pitiful mistakes.

While it was nice to see Andrea finally take a stand against the Governor, it was only after Milton revealed to Andrea the Governor’s plans. It was odd that Milton, the Governor’s man of science, was more willing to kill him. However, when the time to take action, Milton choose to stop her. I have yet to understand why the writers even allow these characters to bring up such half-witted ideas, only for them to quickly back out mere minutes later. While Milton’s may still have a semblance of friendship with the Governor, he has continuously mentioned how evil he is. Hopefully, Milton comes to quickly realise whose side he is on, as did Andrea…finally.

Deciding to leave Woodbury, and its inhabitants, Andrea pleads with Tyreese and Sasha to let her escape. Yet it was odd that she choose to warn these two individuals, who only briefly know her, of the Governor’s atrocities, instead of, I don’t know, everyone else in Woodbury. After months of spending time with these citizens, you would think there was one person Andrea could talk too. Once again though this further illustrates how one dimensional Woodbury was as a town, and how the only true inhabitants of interest are the Governor, and to a lesser degree, Milton.

While the process of Andrea escaping had some intrigue, these scenes ultimately fell flat. The walker attack scene felt really forced. Especially when the camera slowly pans around Andrea and the ‘inconspicuous tree’ in which a hand can fit perfectly through. Her entire escape felt sadly predictable. This includes the game of cat and mouse with the Governor. While it starter off creepy, with the Governor chasing her in a field as he cunningly smiled behind the steering wheel, the intensity came to quickly vanish with the little hide and seek game they played within the abandoned building.

Everything in this sequence screamed terrible horror movie. The Governor slowly banging the shovel against pipes; the moment he is about to catch Andrea but then hears some glass break elsewhere. It was as if everyone in the writing room discussed what the worst horror movie clichés are and instead of tossing them out, accidently put them in the script. While it started off as creepy, these scenes all together too long, with the events becoming predictable, including the Govenor’s supposed death off screen only to appear just in time to stop Andrea from reaching the prison. It is such a shame too, because there is still no real threat to the Governor. He simply feels like a man who talks a big game, but then hides in his fortress. While he does now have Andrea in his little torture room, which could lead to some horrifying moments, I still have yet to see the Governor as a proper villain for Rick. Rather he feels, like a villain for Andrea, which is not the point of the show.

While Andrea’s little game fell flat, it was nice to have a story with Tyreese and his group. After the going to the walker pit with Martinez, Tyreese and Sasha are quickly realising what sort of place Woodbury is. Furthermore, the burning of the walker is an intriguing mystery, as there are a number of characters who could have killed those walkers. While it could equally be Tyresse, or even Milton, who the Governor cornered near the end of the episode, I hope it is someone else, like Sasha. These three characters, who want to believe so much in Woodbury, are slowly starting to see through the cracks and so maybe the Governor will have a little uprising on his hands.

A little comment must be made on the opening sequence. It felt odd to include a flashback with Michonne and Andrea-revealing a little of Michonne’s dark background- only to have her not appear again for the remainder of episode. Why they would include this in this episode, and not one in which focused on Michonne, is beyond me, and so hopefully next episode we have a few revelations about Michonne.

In an episode that was meant to be a ‘finally’ moment for Andrea, “Prey” got a little sidetracked with a slow moving second half. While it will be exciting to see the final (?) battle play out between Rick and the Governor in these final two episodes, I am unsure if this is enough time to truly make the Governor a menacing villain. I highly doubt it, for it took them this long to get Andrea to clue in, it will likely be another season before the Governor becomes a real threat.