One of the joys of writing this review column is that it’s essentially a “whatever you want” sort of gig — you can’t make new old games, after all. As such, I’m afforded the luxury of being able to plot a certain rhythm to the games I choose, and make adjustments if I’m feeling especially aggrieved or burnt out with one sort or another. It also means I can revisit some that are now considered classics of their era, with my now-jaded eyes, and sort out what’s really worthwhile. Sometimes my instincts pay off in terms of the fun, sometimes they doesn’t — last week’s Super Ghouls’n Ghosts, which I remembered fondly as a titan of its unforgiving, side-scrolling age (and indeed still enjoy), didn’t have as much to recommend it as my nostalgic remembrance did. The memories of childhood can be twisting, meandering, and flimsy — to say nothing of the whimsy.

But today’s game requires no such reach, or mental recall, or leap of faith. This time, I went with a game widely regarded as (if not the best overall) the best sports game the NES would ever be graced by. I speak of Mike Tyson’s Punch-Out!!. 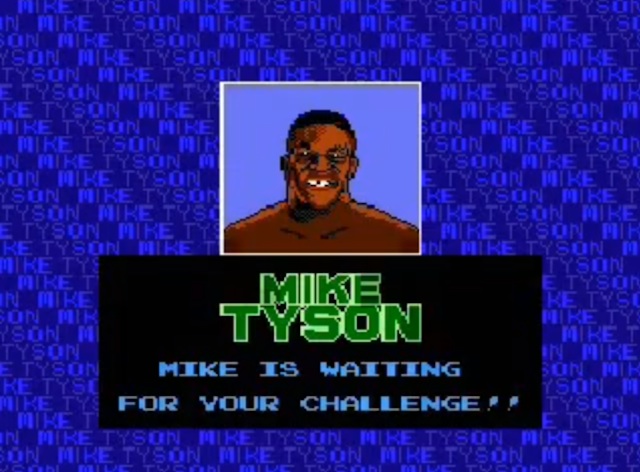 For clarity’s sake, and this may seem like a laughable disclaimer to give to anybody who played the original North American version of this game, but indeed — Mike Tyson is the sponsored athlete of this game, and as such his toothy grin shines back at you in this introductory screen. Iron Mike is not, however, the protagonist of this game. You will never get to play as Kid Dynamite. You will only fear him.

For, in a move somewhat counter-intuitive when you really think about it, the superstar boxer they shelled out the money to gain the rights to is not on your side. He’s your nemesis, in fact — Punch-Out!!‘s final and most devastating opponent. In subsequent releases, both for the NES and later for the Wii Virtual Console, Tyson was excised and replaced by some corn-fed white dude named Mr. Dream. Tyson and Dream are copies in function, when (or rather if) you advance to fight them. This was widely believed amongst my friends and I, at our tender young ages of six or seven, to have been the consequence of Tyson’s 1992 rape trial, but that wasn’t true — it was simply an expired licensing deal, with the new version hitting shelves a good two years before his conviction. Suffice it to say, the Mike Tyson version is the one I played, so if you want the full Mister Christopher experience, that’s the one you should seek out.

You play the role of Little Mac, a 17-year-old Bronx native, a never-say-die boxer true to his moniker — he stands a mere four feet, eight inches tall. Nintendo is not one to skimp on their underdog stories.

The game was intended as a port of the Punch-Out!! and Super Punch-Out!! arcade cabinets, which featured a much different perspective and design than what the modest abilities of the NES could accomodate. This explains, to some extent, Little Mac’s startlingly slight stature — rather than present the boxing ring from behind your player, and rendering him in green wireframe as in the arcade versions, he’s just a tiny dude in the very bottom of the ring, with a sort of 45 degree top down angle on the action. Your opponents all reside in the upper half of the ring, and all of them are much bigger and (with one exception) look much more intimidating than you. Also, in most cases, distinctly more racially stereotypical.

The core of this game is undoubtedly it’s controls and fighting mechanics, which are both endlessly engaging and delightfully simple. How simple? Press left or right to dodge left or right. Press down to block a punch, taking some diminished damage, or double tap to try to duck the blow. The A button punches with your right, the B button with your left. If you’re deft enough to jab your foe at the right moment, a star will flash over their head, earning you a leaping uppercut, which can be fired off by pressing the start button.

The reason the simple controls are such a boon is that Punch-Out!! is in essence a repetitive timing exercise. Each opponent has a different, but static set of punches, hooks, uppercuts and special attacks they will deploy against you, and your adjustments to those attacks, ultimately, dictate your success as much as your offense does. In the game’s first showdown, against the woeful Glass Joe, a 38-year-old Frenchman with a career record of 99 losses against just 1 win, this is an aggressively easy task, to the point that trying to dodge his attacks is almost wholly unnecessary — just keep pounding him with punches and he’ll drop in short order.

But in equally short order the difficulty ramps up. Glass Joe gives way to German fighter Von Kaiser, something of a slouch in his own right, followed by Tokyo’s own Piston Honda. It is no doubt distracting and a little troublesome how many of the game’s fighters are defined, in their entire presentations, by race: the aforementioned Honda, the magical Indian boxer Great Tiger, the suave and relaxed Spaniard Don Flamenco, and a pop-guzzling Russian, fittingly named Soda Popinski (in the original Japanese version, they aren’t so coy — his name is Vodka Drunkenski). There’s also Mr. Sandman, a hulking, black American boxer, as well as Mike Tyson himself. But lest you fear all the boxers are foreign or racial stereotypes, there’s also nondescript oddballs like Super Macho Man (a musclebound American from Venice Beach) and the notorious King Hippo (perhaps a facsimile of some sort of “exotic” island ruler, I grant you, but also cartoonish and absurd).

At the end of the path, which isn’t easy to get to — I always used to start faltering against the aforementioned drink-dependent Russian, who is only the sixth fight out from the title bout — you’ll lock horns with the man of the hour, and he is in every way as devastating as advertised. His punches erupt with drastically less time to react than any other fighter, and they do some pretty major damage. Suffer a hit from one of his cross-body uppercuts, with which he opens each fight with a flurry, and you’re on your ass in one hit. When you’re finally at the edge of the pinnacle, there is no room for error. I never successfully defeated him as a child, sadly, considering how much more it would have meant back then, months of frustration still fresh in mind and body. That had to wait until I was 23, and flush with reflexes just sharp enough to handle it all.

The music and graphics both rise just to the level they need to, no less, but certainly not more. The enemy animations are surprisingly fluid, and the sprite art conveys a wide range of facial expressions and rollicking attacks. As movement and control responsiveness is key, so too is being able to recognize and react to a punch by the signals the sprite sends just moments prior, and the designers did a fantastic job slowly ramping up the speed and intensity of those moments.

Sometimes it’s fun to take a risk. Other times, you want to know what you’re getting, perhaps in the moments when we feel most down, or lacking for joy. The comfort pastimes, and hobbies of life. Though there are countless NES titles that can endear, thrill, delight, and keep you busy to no end, only a handful deserve to be held as masterstrokes of their form. You know, the classics.

Punch-Out!! has earned that mantle in spades. It earned it when the game was first released, instantly engrossing throngs of children around the world (while also, mercifully, not seeming to propagate many new participants in the brutal sport, basing on the decayed state of pro boxing over the last couple decades). And it’s earned it through the ever-unpredictable test of time — does it hold up today the way it did then? Perhaps more than any other game of its age, the answer is a ringing yes. Beyond its durable memorability and offbeat pop-cultural cred, I could play this damn game anytime and be tickled pink. In fact, that sounds so nice, I may go do it again now.

Oh, and also, I must add — the most iconic training sequence in the history of video game boxing: