Tuesday was a big day for Microsoft. At an event in Remond, Washington, Microsoft unveiled their next generation of gaming- the Xbox One. After digesting all the news and info on this new console, I have come to contemplate what I enjoy and dislike about the new Xbox and where I will think it will go in the future.

This seems like an obvious choice, but the hardware for the new Xbox is mighty nice. Not only was Microsoft smart enough to put in a Blu-ray drive, ala Playstation, the 8 gigs of DDR 3 ram, as well as the expected HDMI input and output, ethernet and U.S.B. all make this a damn sexy machine.

In terms of software, the Xbox One boost three operating systems:  there is a core operating system, which is based on their Hyper-V tech; Xbox OS, that helps run the games; and lastly an operating system that is based on Windows 8 and helps to run programs such as Skype, as well as the TV feature (more on that later).  What makes this significant is that the last two operating systems can run simultaneously thanks to the hyper-v, or hypervisor. This means that gamers can quickly move back and forth between games and apps with ease. This is a big deal, and very exciting, for no longer do you have to turn off your game to watch a movie. Now you can just put it on pause and put a movie on as it waits in the background.

All in all, the Xbox One setup is quite nice and makes me very excited to see what Microsoft comes to further do with the system.

Dislike- Will Not Function Without Kinect

After the conference, it was confirmed that the new Xbox will not function without a Kinect. After seeing how the Kinect has been received one would think that Xbox would have placed this peripheral in the background for the new system. Instead, they choose to make it a vital, if not the most vital, aspect of their console. This calls into question what they plan on doing with the Kinect? While they have been a few games that have greatly utilized the Kinect, such as the under-appreciated The Gunstrigner and the over appreciated Dance Central, these games have been very few and far between. In order to make the Kinect truly important, not only to the system but  more importantly for the players, they are going to have to: a) make sure the majority of games have some form of optional Kinect usage and; b) ensure that it is good and in service to the game. Adding optional Kinect controls will still allow for classic play while not ostracizing players who will not want to use them. At the same time though, they should ensure that most games have it in order to allow fans to experience and adopt the Kinect to a number of game genres, and not just party or dance games. This is easier said than done, for to do this Microsoft will have to ensure that developers have full access to the Kinect and that they will want to make it an integral part of their game. Possible- yes. Likely-not very.

Despite owning a Nintendo Wii, I still find the Xbox 360 controller to be the most natural and form-fitting  controller while playing. The Xbox One controller is perhaps the perfection of video game controllers. The directional pad is now properly directional. The analogue sticks are perfectly indented for thumbs.  The main home button is now located on a separate back between the triggers. Microsoft realised the flaws in their 360 controllers and improved on them significantly to make one nice looking play thing. The only issue I have with it is this- impulse triggers. Apparently, the controller has rumble packs within the trigger buttons in order to provide feedback and make the player feel more immersed within the game. This seems like a proper fit for shooters, or racing games, but where else would it seem appropriate to use these impulse triggers? Assasins Creed IV right before an assassination and a kill the trigger goes off startling you and making you freak out and kill a few civilians in the process before realising you are not being shot at?  How about any precision platformer as you jump and land it goes off, annoying the player so much they decide to toss their controller. This implementation seems kind of strange and unnecessary, but overall the Xbox One controller is one fine way to play. 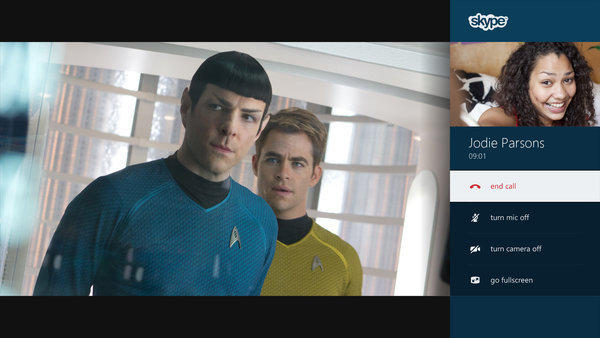 For a console that is supposed to be about the next generation of gaming, the Xbox One seems to be far more focused on being an entertainment console. I am not particularly upset that they did not show games, as that will occur a month from now at E3.  The issue with this is that people already have a number of other media devices that perform these exact same thing- and in many cases better. Why would I want to stare at a huge live video of my friends on Skype? My computer screen is the perfect size, and I would rather be not staring at their pixelated pores on my HD T.V. If I want to search the Internet or watch ESPN,  I would watch it on T.V. or would use a computer-ironically one that is fitted with the same operating system by Windows ,but still. Also the prospect of talking to your friends while watching Netflix or HBO Go does sound enticing, if it were not for a thing called varying Internet speeds. I get very excited while watching television shows or movies and like to talk with friends while watching them- at the same time. I can easily see myself spoiling something , like, “Damn, Luke Skywalker they should call you cool hand Luke (get it because he loses his hand and Cool Hand Luke is a reference to the 1967 film starring the astounding salad dressing creator Paul Newman…forget it). All of these additional services are great to have, but making them seem like they are the most important part of what is supposed to be a video game console is quite misleading.

I know this is two dislikes, but  this one really bugs me. I do not understand why they cannot make One backwards compatible with their games. Great that it is brining players gamer scores from the 360 over, just too bad they can no longer play the games without having to plug in their 360, which is likely to be collecting dust alongside their original Xbox and. “The system is based on a different core architecture, so back-compat doesn’t really work from that perspective”, said Microsoft’s Marc Whitman. This should be read as: we say we will continue the support of the 360 but we won’t as it is now a thing of the past. I understand the need for the company to be forward thinking, and Microsoft is not alone in this as the PS4 will be the same. It is just a shame that to be so forward thinking we, alongside Microsoft, are expected to forget about the past and what brought us to the present.

The Xbox One is the dawn of the new era for Microsoft in the console market. While I would not say that I am overly enthused about everything that they are doing, I will say that I am cautiously optimistic. The Xbox One has the chance to be a bold and invigorating machine and to not be just a console, but a one-stop entertainment playhouse. If the Xbox One can come to finely balance these aspects I am sure that Microsoft and the Xbox will continue to be the one true console for millions of people around the world.