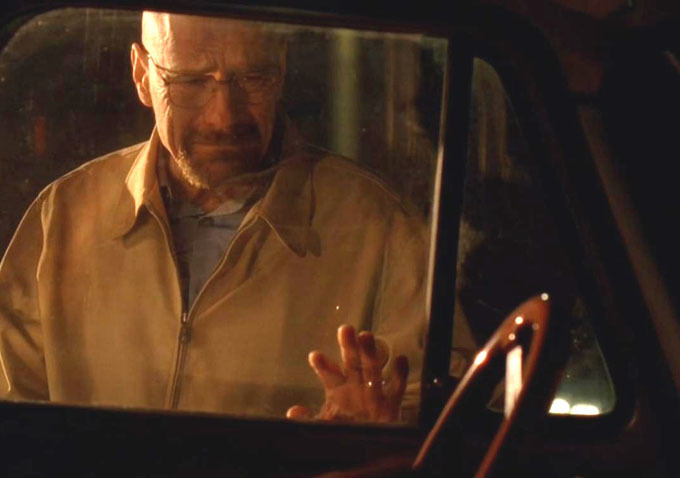 The following is a written conversation between Editor-In-Chief Evan Tognotti and Senior Editor Matthew Milewski about this week’s episode of Breaking Bad. Spoilers, you guys. Obviously.

MM: Last week Evan, you laid out a lot of fairly damaging issues surrounding this last half season of Breaking Bad. The episodes leading up to this one have been, generally speaking, a little rough in their plot progression, and also suffer a bit from some undercooked side characters like Todd and Lydia. There’s been a lot of great stuff despite this (notably “Rabid Dog” and pretty much all of the recent ending moments), but it just hasn’t quite lived up to expectations.

To an extent though, this is fairly characteristic of several stretches of Breaking Bad; what’s made this forgivable in the past is an excellent payoff when all is said and done. Well Evan, I think this week’s “Ozymandias” is very clearly that point. From the bittersweet nostalgia of the cold open to the last shot of Walter resignedly heading towards his new life, there’s nary a moment of this that isn’t gorgeously shot, written, and acted. It’s not quite as good as Rian Johnson’s masterpiece “Fly”, but it comes stunningly close all the same. Thoughts?

ET: I’m going to one-up you, Matthew, and in fact propose that “Ozymandias” is the best episode of Breaking Bad yet. Were it not for the crowning achievement of Buffy The Vampire Slayer’s “The Body,” I’d go so far as to call it the best episode of television I’ve seen.

What works so well in “Ozymandias” is entirely due to simplicity. My major issues with this season thus far, and a lot of Breaking Bad in general, have to with mechanics. I can’t get behind calling these stretches forgivable (season 3, for example, set up stakes fluidly and payed them off doubly so), because I know it could be done better, and I’ve seen it done better.

That said, though, the payoff here is unimaginably satisfying. A lot happens in “Ozymandias,” but it’s easy to swallow, thanks to Johnson’s direction and Moira Walley-Beckett’s tight scripting. It’s an episode that makes me feel validated for being underwhelmed last week. This is what Breaking Bad can do when it tries hard, and I wish it was trying harder earlier in the season.

Ultimately, the thing that pushes it over the top of “Fly,” (previously my second favorite episode of television) is the phone conversation between Walt and Skyler at the conclusion. The foreshadowing is nice and all, but the focus is very rightly placed on two non-stylized close-ups, and it’s the best television acting I’ve seen this side of, well, “The Body.” The rest of the episode, hell, the rest of the series, somewhat pales in comparison to this moment for me.

I think what I love most about it from a story perspective is how that one call is perhaps the single truly selfless thing Walt has done over the course of this show. There’s no real tangible benefit he gains from making that call, and it’s obviously distressing. He could’ve just left with Holly and gotten into that van, starting a new life as a single father. The only time I’ve really ever sympathized with that character was when he was most outwardly aggressive, and that’s really something.

MM: The scene on the bridge is the highpoint of the episode for me as well; Bryan Cranston’s constantly shifting facial expressions coupled with Anna Gunn’s slow acceptance of the situation are acting highpoints for the two of them. It’s a standout scene in an episode littered with them; the brilliantly done knife fight, Jesse’s reaction to his new hell, and, of course, the cold open. Everyone does an excellent version of their less-experienced self, but what truly makes the scene special is the way the past fades out and is replaced by the present. It’s pretty saddening to see how different the two Walters are from each other by now.

Indeed, Evan, I’ve rarely felt as sympathetic for Walter as I did at several points in “Ozymandias”. The tragedy in this episode is all completely earned, but it’s still hard not to feel for the guy when everything he’s built up or protected over the series comes crashing down in quick succession. The scene where he offers up his entire fortune to save Hank’s life is agonizing. Or even more heartbreaking, the moment where he accuses Skyler and Walter Jr. of not acting like family, only to realize he’s completely lost them as well (I love that slight pull-out from the two’s scared faces).

Hell, this episode almost made me glad for the Nazis as characters; the sheer lack of empathy on both Jack and Todd’s parts are pretty mind-blowing. I’m not going to say that this episode quite makes up for past issues or anything, but there’s a lot to love about Jack’s little comment on greed and Todd’s understated “Ready to cook?”.

I was particularly glad that Skyler got an assertive moment of her own. Her passive nature throughout the series has been a source of frustration for many (including myself, to an extent), so the way she, quite literally, cuts through Walter’s bullshit is hugely earned. Kudos to RJ Mitte too for his reaction to the huge revelation he’s given (the brief scene in the car between him and Skyler is a well-earned moment of dark comedy), as well as the resulting scene at the White Residence.

Honestly Evan, this episode would have almost been effective as the season finale. The shot of Walter dejectedly traveling to his “new life” is a pretty great one. How do you think these next couple are going to turn out?

ET: The news just broke that these last two episodes will get 75 minute time-slots, which is very interesting. I like the idea of them taking their time a little more, but I definitely think I’ll miss Johnson’s direction. Some scenes in this episode (namely the knife fight and the build-up to Hank’s death) straight-up wouldn’t have worked without his framing.

At this stage, I foresee two options: 1) Walt doesn’t go through with the identity change, or something stops him, 2) We flash-forward a couple months to him settled into his new life, to catch up with the season’s cold open. 2’s probably correct, especially when you consider the way this half-season started, with Walt visiting the house and the neighbor dropping her groceries in surprise.

I’m starting to hope (the narrative pessimist that I am) that Walt gets out alive at the end. Not morally, obviously. The satisfying thing would be for him to die in a gunfight, or poison himself with ricin, or any number of obvious wrap-ups. But I worry that this path they’ve led me down, and the impact of that phone call, might be cheapened if it isn’t in service of some triumph. Walt has finally used his more cunning sociopathic tendencies to actually protect his family. There’s no more bullshit. Letting him get out alive would traffic in the moral ickiness I like so much on Breaking Bad; reward and cynicism in equal measure.

MM: At this juncture, I doubt this would even be the preferred option for Walt. The man has lost the one thing he valued above all, and the realization has made him with nothing to live for. I’d imagine that whatever this motivation is though, and I personally think this is going to result to arise from his remaining family being killed off, it’s likely to kill him. Still, Vince Gilligan proved here that his team of writers can do messy extremely well when they want; let’s hope they did.