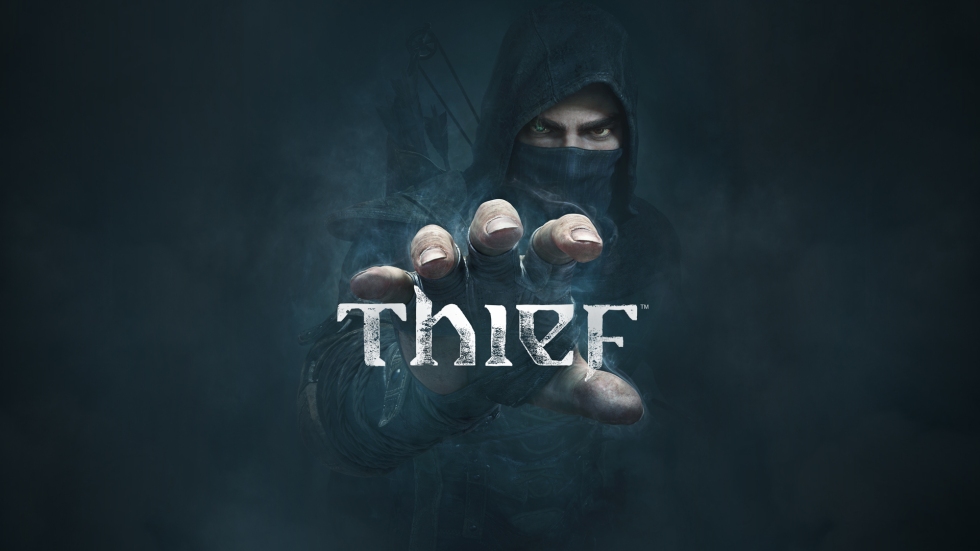 Looking Glass’ original Thief games helped to define a generation of stealth titles. After an extended absence, Garrett returns in a new iteration from Eidos Montreal. Thief’s primary gameplay motives should be pretty clear from the title alone, but it suffers from a severe lack of focus. Instead of centering on the tools of Garrett’s trade, Thief tries too hard to be something it’s not, which ultimately breaks the one thing it does well.

That primary motive of stealing is probably the best part of the new Thief game, though. You have the opportunity to sneak through the Victorian-era-meets-steampunk buildings and houses, stealing just about anything not nailed to the floor (you can, however steal paintings nailed to walls). Everything you steal gets instantly transferred to gold which you can use to buy items and upgrades. It is a good feedback loop of actually feeling like you’re accomplishing something. But the rest of Thief seems intent on stopping you.

Even something as simple as going to buy upgrades or items is more of a hassle than it should be. The overworld in Thief is one of the biggest blunders in the game. It aches to be open and treated as a respectably sized world for Garrett to explore to his heart’s desire. But sadly the world is cut into bite-sized claustrophobic sections, and the game doesn’t tell you when you’ll move between each area. A window may lead to a room where you can steal a couple of forks, or to another section which calls upon one of the many, many loading screens you will encounter. There are no indications that different sections exist until you stumble upon an entrance to one. The city also doesn’t feel well designed for Garrett’s style of maneuverability. You could be traveling along rooftops to get to your destination, only to discover there’s no conceivable way to continue where a thief would feel most safe, and you must instead explore the city streets, where guards patrol in very rigid patterns.

Anytime you have to engage enemies, whether through combat or sneaking past them, Thief stops being mildly enjoyable and starts being a hassle. You’ll notice distinct patterns in the guards patrolling the streets. Distinct enough to move past with little problem in the overworld. They feel like an afterthought, something that maybe would have worked more if there were more verticality in the levels. Garrett can’t climb up buildings save for the prescribed points in which he can mantle himself up with his trusty claw gadget. And even then, the higher path generally ends before you can get the drop on guards or move past them without an alert. Which forces you to sometimes engage with enemies using Garretts arrows, sneaking up behind to knock them out, or alerting them. 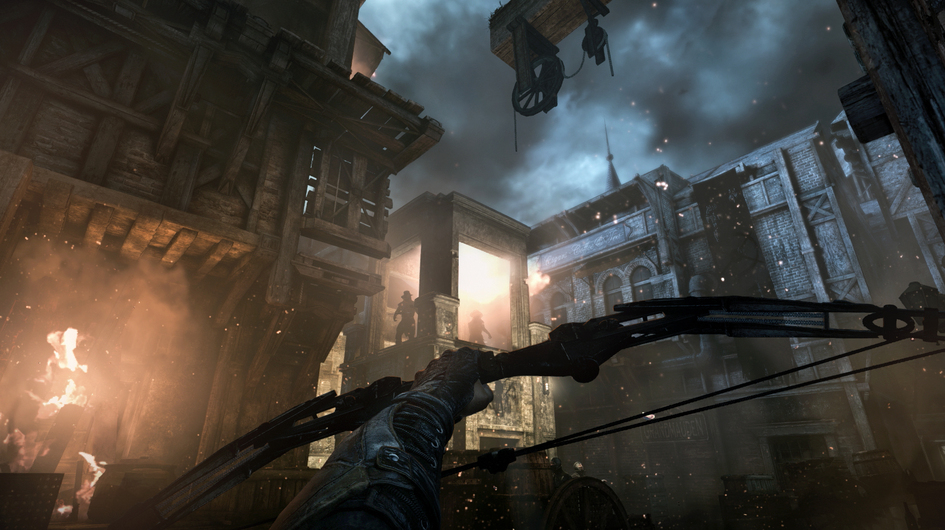 Alerting guards forces you into two options: you can run away and hide in the shadows for a short amount of time before their dementia makes them forget you ever existed, or you can engage them in combat. Combat is not the preferred option, in fact, if you ever face off against more than one guard in combat, you might as well reload your save because there’s no way you will be able to dodge two sets of swords and hit them enough with your little bludgeon to knock them out. Sneaking behind guards to knock them out may not net you the desired results either since Garrett likes to spend a lengthy animation laying the guards down. You can then pick them up and drag them… somewhere. There’s really no place to hide bodies besides the shadows, and even then, a guard is bound to notice the body at some point. Garrett is also outfitted with an arsenal of arrow types for given situations: water arrows can extinguish torches, fire arrows can set fires to random oil slicks that conveniently line up with barrels that will explode, and choke arrows will send guards into a coughing fit long enough for you to get around them. Then there are pointed arrows that you can just kill people with. The problem is these arrow types are just that: types. They don’t allow for much in terms of experimentation or improvisation as you meander through the bland level designs.

And bland they are. Thief takes place in an ever-constant state of darkness, making the color palette a boring mix of greys, blacks, and blues that all run together and give a dull sameness to the world. The mission environments don’t allow for enough maneuverability or choice in how to sneak past guards. It offers some alternate paths, but they are mere shortcuts to take you to another section with a ton of guards that you have to sneak around. The levels are mainly just a series of narrow corridors for Garrett to crouch down in. You never feel enough like a silent badass in Thief; you always feel a little bit inadequate.

Even in those story missions, Thief spends very little time with actual thievery. Garrett spends around ten hours meandering through a plot filled with mystical nonsense surrounding a force known as the Primal which is a magical thing that does magic, I guess. It’s never really explained what anything means in Thief, save for one instance where a character tells Garrett he needs to stop the bad guys from using the Primal or the city will unravel as if it never existed, and man, that would have been a much better outcome. Set-piece moments are doled out in a way that doesn’t really fit with the rest of the game. You’ll run through collapsing buildings with fire dancing at your heels but that amounts to… what in a stealth game? Either way, stealing is relegated largely to the side missions and an option throughout the level. Only once or twice is Garrett actually going somewhere with the express desire to steal something. And even then, that’s when those annoyingly out of place set pieces arise.

Thief also has a myriad of annoying bugs and inconsistencies, most notably an incredibly inconsistent framerate and audio that doesn’t feel properly implemented. A number of times music would be louder than the world and I’d find myself getting caught because I couldn’t hear a guard behind me over the weirdly off-beat synth soundtrack. I could hear people speaking through walls as if I was right next to them. In cutscenes one character’s audio would be clear, while the other was muffled and silent — they also had some pretty bad lip syncing issues. Enemy lines would loop constantly once they were alerted, and some NPCs would start the same conversation immediately after finishing it. Did you know there are two guys talking about a prostitute and one is super jealous the other got on the waiting list to be pleasured by her? Oh, well, if you play Thief you will be able to recite that entire gross exchange. This being an Unreal game, there is constant texture pop-in, which gets annoying, especially when playing the Xbox One version of the game and it feeling decidedly last generation in production quality.

Thief wants to be too many things and in turn isn’t very good at doing any of them. It wants to be a more modern stealth action game like Dishonored with multiple paths and a sense of agency in the flow of gameplay, but doesn’t give players enough to ever make them feel powerful. It wants to be a classic stealth game like the Thief of old, but that design has been eclipsed by more modern and engaging stealth games. It wants to be a game where you steal stuff, but relegates all stealing to side activities. It wants to be a semi-open world but limits itself by sectioning off the world into small, claustrophobic chunks. There was a tiny bit of joy I got from stealing every piece of gold in the city for myself, but Thief is ultimately more boring than its worth.