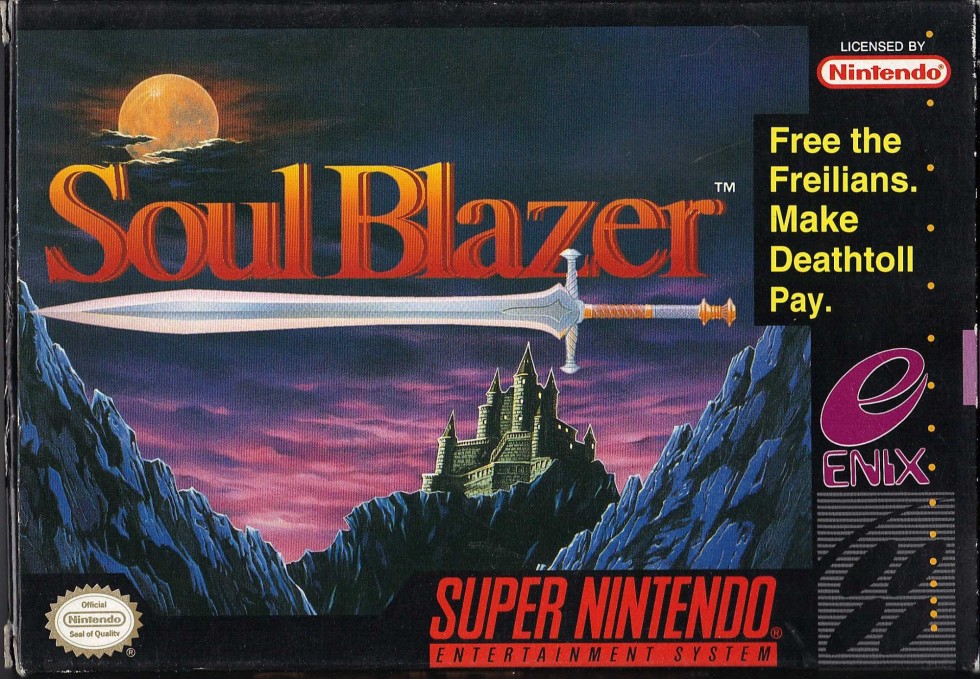 There’s a moment very, very near the end of Enix’s 1992 action game Soul Blazer where a character asks you to make them a promise. You’re leaving, for one reason or another, and this person says that even though you may never return, she’ll feel better if you lied and said you would. She asks you one last time, and the normal bit of agency Soul Blazer lends you, a “Yes/No” response, is minimized for the only instance in the entire game to a single option: “Yes.” It’s a compelling and surprising moment that serves to encapsulate Soul Blazer as a whole, and its frequent ability to find moments of bizarre power in unexpected places.

The elephant in the room is that it’s a little hard to tell how much of Soul Blazer‘s sleepy, pseudo-philosophical charm lies in the work of its creator, or the substandard work of its English translator. Almost everyone in the kingdom has something to say, and while a few of them give you some insight into a side objective, or even where you’ll need to travel next, a seemingly greater number just wax poetic about the nature of their existence. Taken on its face, these interludes are silly and pretty much pointless. But I found myself reminded (in my recent, second playthrough for this review) of how Soul Blazer builds an enticing and absorbing atmosphere through the dream-like ramblings of a wayward soldier or talking goat.

I call it dream-like because the conceit of Soul Blazer demands a sort of omnipotent placelessness. You’re the (capital-H, mind you) Hero, divine but in human form thanks to the work of The Master — a creator who’s more content to encourage his angels to do good than he is to make much of a change on his own. The evil lord Deathtoll has trapped every inhabitant of this seemingly unnamed land in a monster lair, and it’s your job to liberate everyone and everything.

This kind of gameplay loop is actually quite engaging, even though the mechanics are a bit basic. Each new zone you visit has a set of dungeons and a peaceful, initially empty overworld. As you dig deeper and deeper into these dungeons, you’ll run across the aforementioned monster lairs, which spawn one of a variety of enemies. Kill all the enemies as they spawn, and you’ve liberated whatever’s trapped inside. That might be another monster lair, or a new path in the dungeon. It also might be a tree, building, anthropomorphic squirrel, or porcelain doll. All of those old world standbys populate the overworld as you free them, and often help you on your mission.

It gives the dungeon crawling an extremely satisfying feel, as you clear out monsters down below and rebuild society up above. There are a couple obvious problems with this system, none too damaging: the sheer amount of items you restore makes it hard to keep track of where you have and haven’t been in the overworld, and a late-game backtracking mission suffers from a lack of information regarding which areas haven’t been fully cleared.

The thing that ultimately ties all of this together is Soul Blazer‘s incredibly strong atmosphere and art design. Each new corner of the map you visit has its own theme or tone, from the forests of Greenwood to the infamous Dr. Leo’s Laboratory. More than anything, the style feels as cohesive as it is varied. Serious props must also be paid to Yukihide Takekawa’s score, which ranks among the most underappreciated on the SNES.

Soul Blazer, for all its charms, is not without a healthy dose of frustration. The biggest offender: bosses that feel unfairly, rigidly precise. Most encounters in Soul Blazer work, because you’re facing off against a monster lair spawning a single enemy. The amount that it spawns generally gives you enough time to figure out the best angle or method of attack in dealing with them, making it feel more like a puzzle than real, Zelda-type sword fighting.

The bosses are also structured like puzzles, in that there are some very specific ways you should go about fighting each of them. The penalty for not utilizing these sometimes obscure tactics: death. Most every boss in the game can chew through your health right quick, and I found my success often hinging on whether or not I had a medical herb in my inventory, which refills all your health upon drain, like a ration in Metal Gear Solid. I found ultimately triumphing over these obstacles satisfying, but there’s no doubt that they could be better designed.

So no, not all of Soul Blazer stands the test of time. But the things that do: the atmosphere, the fascinating translation, the mature tone and unique dungeon crawling — they all combine to make something great. It reminded me instantly of what a rare breed developer Quintet truly was on the SNES. You can see roots of the current indie game renaissance in Soul Blazer, and it doesn’t feel accidental; the basic gameplay coupled with cryptic dialogue reminded me most favorably of last year’s Anodyne. Despite the generations separating them, games like these feel linked in their desire to let the player read between the lines, fill in some deliberate blanks, and build up little fantasies in their heads. It’s impressive, in retrospect, that Soul Blazer did this before almost anyone else. It would strike me as hugely influential, if only more people had played it.