War never changes, especially in video games. Countless number of games set you in the heat of battle, gunning down hundreds of enemies with reckless abandon. We never understand the pathos of those stories; we never hear of their struggles; all we ever see are moments plucked from action movies. Valiant Hearts: The Great War tells a touching story of a handful of soldiers in the midst of World War I — it’s just a shame this story needs to be a video game too.

Valiant Hearts plays like a classic adventure game where you’re given a problem and need to solve several puzzles to get to a final solution and continue. But these puzzles are often incredibly simple to solve, yet take a long time to complete. With only a handful of puzzle types, everything slows to a crawl as you find a lever, distract a guard, blow up an obstacle, or sneak past a group of soldiers. See something dangling from a tree; throw an object to knock it down. Call your dog to get an object out of reach.

Even still, Valiant Hearts never assembles these puzzle components in challenging or clever ways. You’ll walk along the 2D plane until you see one of the obvious puzzles, take a few minutes to complete all the tasks at hand, then continue. The most egregious of these simplistic puzzles come when you’re forced to solve a series of them in order to get the object you need to continue. For instance, in one section a character is in a POW camp and must escape — but he needs wire cutters. You see the wire cutters nearby, but a dog is guarding the path — he wants food. You continue through the environment, seeing each simplistic piece you need but first need to solve a different puzzle to get the object you need to solve another puzzle. This creates a Rube Goldberg inspired series of events where turning on a shower for a guard snowballs into you getting wire cutters and making your escape. It’s boring, simple, and does nothing to further the mood and narrative. 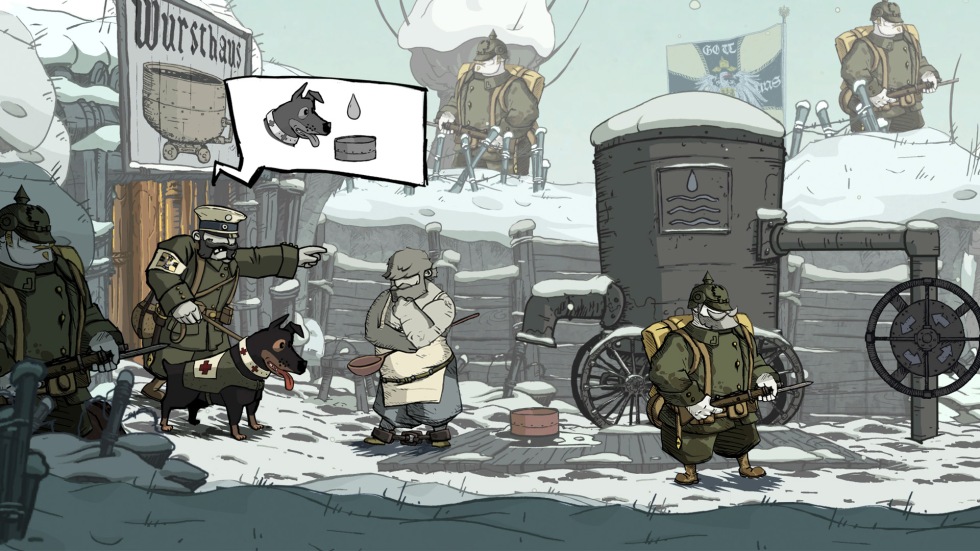 Valiant Hearts shifts the focus of war away from battles for good against evil and creates a human story filled with pathos. It tackles war from a sense of love, loss, and the horrors of war. You play as characters from all sides of the war: a German caught between his love and his duty, a Frenchman who wants to see his daughter again, a Belgian woman struggling to find her captive father, and an American that wants to fight for glory. Most of the story is told through narration at the beginning and ends of each section, with all the in-game dialogue told through mumbles, grunts, and comic-book style word bubbles.

The tragedies of war are ever present within Valiant Hearts with strikingly poignant moments like using the bodies of fallen soldiers as cover. But this shocking portrayal of war is bogged down by all those adventure game puzzles, so much so that the middle section of Valiant Hearts feels tacked on and padded for time. No new revelations are had between the characters, no shocking moments or blissful reprieve — the middle is a bunch of puzzles with story beats that lead all the characters to a central location for the end. The final chapter of Valiant Hearts brings the story into a terrific and satisfying conclusion, but the slog it takes to get to that point dulls the emotional impact.

Valiant Hearts has an excellent artstyle and touching soundtrack to accompany the desolation of war. Valiant Hearts employs Ubisoft’s UbiArt Framework engine to deliver some beautiful and simplistic scenes. Colored in mostly browns and greys, Valiant Hearts captures the dirt and grime of war well. The art looks like a hand-drawn French comic book from the era. The sobering and beautiful soundtrack helps capture the emotional toll the war takes on the characters.

Valiant Hearts tells a story not often told in video games, set during a terrible war often never tackled in favor of World War II. The Great War was not one easily discerned through right and wrong, good and evil; it was harsh and brutal with both sides of the conflict doing some nasty things to each other. Valiant Hearts does a terrific job with its setting and tone, but actually playing the game leaves much to be desired. I wanted to like Valiant Hearts more than I did just because it’s something much different than we normally see in games — especially games about war. But Valiant Hearts: The Great War makes for a better history lesson than a video game.