Sunset Overdrive relishes the fact that it’s a video game. It feels like a complete shift from Fuse, Insomniac’s last game. At times it harkens back to their Ratchet & Clank days, but this is a much more mature and self-referential world. Sunset Overdrive has a decidedly punk rock, fuck-the-establishment vibe that never lets up. Sometimes that’s a good thing; sometimes Sunset Overdrive just needs to chill out, bro.

You are a citizen of the recently quarantined Sunset City after a new energy drink called Overcharge begins turning people into hulking orange zombie monster things called OD. Fizzco, the makers of the energy drink decided to lock down the entire city so no one would find out about their mishaps. You, the janitor turned unconventional anti-hero, wants to get out of this city by any means necessary. Welcome to the “Awesomepocalypse,” bro. Grab a jean jacket and let’s rock.

Sunset Overdrive has the capacity to be funny, and occasionally it is. However, it so aggressively wants you to know it is a video game that it constantly shatters the fourth wall in a way that video games are never very good at. It’s not funny to say, “Oh, good thing this game has fast travel,” when your mission marker is across the map. It isn’t clever to criticize your collectibles by saying, “Great another collectible on my way to a pointless achievement.” It is never a good idea to actively critique your video game while in the middle of something that may not be super enjoyable. Stop. Doing. It. Stop making stupid announcer voices that self-identify as dumb tutorial tools/jokes.

The times when Sunset Overdrive is funny are the times when it calms the fuck down and stops being so self-referential and, instead, contributes to it’s silly, stupid world. It’s moments when the joke appears in the explosions of OD and your character feels so cocksure and other characters call you on your bullshit. Or scant few times when the unexplainable happens and instead of saying “Oh, video game!” it owns it’s stupidity and crafts a dumb character moment out of it. Moments when characters poke at the idiosyncrasies of open world games — like how no one has a radio, yet they can talk to each other from long distances. Of course, in that particular instance, they go one step too far and blame the mishap on video games. It’s an easy punchline too often used and almost every time it will fall flat.

Deaths are handled in a greatly appreciated and comical way. After you die, your character will respawn through self-referential or pop-culture gags that are generally quick and clever. There are quite a number of them as well, and stating what any of them are would ruin the punchline of seeing them first hand. But they usually tend to get a chuckle.

Over the course of the campaign, you’ll interact with various factions who have gone a little bit crazy since Fizzco shut down the city. These factions have unique quirks that set them apart from most video game factions. For instance, the LARPers who will not break character no matter what. And the survivalist scout troop with a somewhat tyrannical leader. These factions help give more life to the over-the-top and colorful design of Sunset City.

This is the punk rock version of the apocalypse if there ever was one. Nothing about Sunset Overdrive is ever dark (in fact, there is no day-night cycle in the open world). It is all sunshine and kick-ass everything. The environment is absolutely void of any dreary colors you’d see in a military shooter or pretty much every major game released in the past decade. In fact, it’s probably safe to say Sunset Overdrive has the most colors of any game, as if a box of crayons vomited onto the scenery, splashing a number of vibrant colors into the world. Each section of the city has a different set of primary colors, making them all feel unique. Even the buildings themselves have a different architectural feel to them from the dirty old-school factory settings to the sharp edges of Little Toyko. It is a beautiful and lively city to explore with something new seemingly around every corner.

Punk and garage rock fill the soundtrack of Sunset Overdrive, with heavy, dirty guitar licks and constant pounding drums to give more life to the world. In fact, Sunset Overdrive ties the music to your movement around the world. While roaming around, music will start to play once you trigger a grind or bounce. It’s a nice touch that jump starts your fast treks through Sunset City.

It’s a blast to maneuver around the world too. In decidedly punk rock fashion, you don’t adhere to the normal rules of travel. Instead, you grind along rails, wall run, air dash, and bounce on all manner of objects to get where you’re going. It takes a while to understand the visual language of Sunset Overdrive‘s movement — no game has really done something quite like it, save for Tony Hawk and Jet Set Radio, which are the most applicable comparisons for how you move around the world. You want to get where you’re going as fast as possible, and the way to do that is stay off the ground. The ground is hot lava. (One side mission actually makes the ground hot lava and forces you to stay in the air, which was a pretty cute touch.)

Sunset Overdrive has fast travel, but you may never bother using it because it is such a treat to get from point to point. It won’t be as fast and chaotic as Saints Row 4’s movement, nor as slow and methodical as something like Grand Theft Auto; it’s an appropriate mix of speed and movement that establishes a new kind of freedom in an open world. If a larger range of movement becomes the norm for video games moving forward in this generation, Sunset Overdrive is a great place to look for inspiration.

Linking together grinds, bounces, and other forms of movement not only gets you to places faster than you would on the ground, it also helps you in combat. Again, here the ground is hot lava: stay in the air as much as possible, or else you will die very easily. Sunset Overdrive aggressively wants you to stay mobile as often as possible. Enemies have a much harder time getting a bead on you if you are constantly bouncing around them. Plus, the larger the chain of attacks and movement, the more buffs you get from your Amp upgrades. Each amp has a different use, melee amps give off a small area-of-effect attack, weapon amps augment your guns with various quirks, and the epic amps serve as much more beneficial crowd control buffs. They’re a nice way of incentivizing you to keep your chain combos going (and to stay forever moving).

The third-person shooting of Sunset Overdrive should feel instantly familiar to anyone who has played Insomniac’s Ratchet & Clank series. Weapons all have their jokes attached to them, like a gun that launches teddy bears stuffed with TNT, or the gun that shoots out little Fizzco dolls that spray acid. (The Dirty Harry handcannon has a clever little bang sign that pops out when you run out of ammo.) You level up the weapons individually overtime, giving them more power and a higher ammo count. You’ll never worry for reloading, one of the changes to shooting that helps keep you constantly on the go. Linking the movement with the shooting forces you to think far differently about combat than most games. You’re constantly on the lookout for bounces and grind points to keep away from enemies while finding advantages to engage them. There never seemed to be a dull moment when taking on the various enemies, every action seems set to empower you as a player. 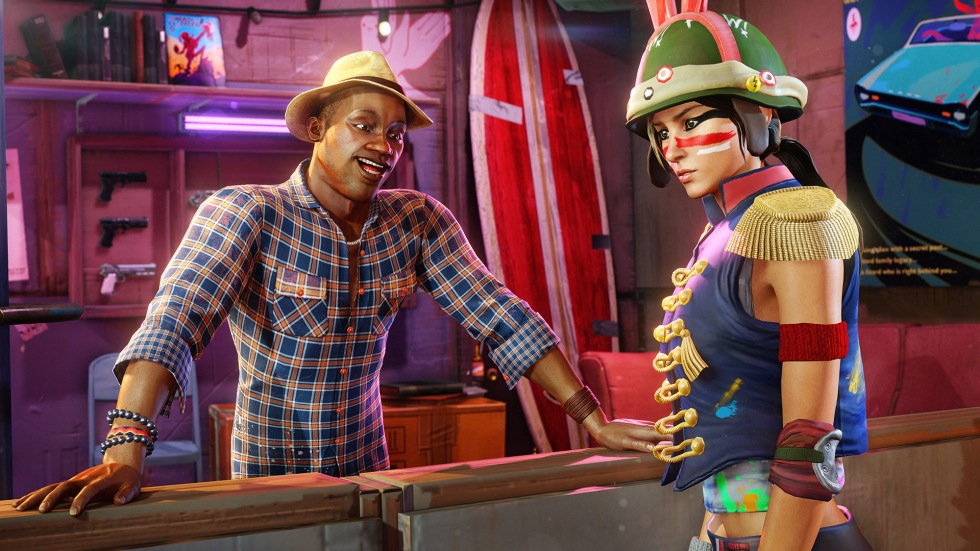 Sunset Overdrive has a fantastic character creation system. There are tons of combinations to try and make a you that fits you, or something else entirely. For the vast majority of the game, I went around as a sardonic woman with fiery read hair and light blue highlights donning frameless hipster glasses. I would constantly change her outfits seemingly after every mission and thoroughly enjoyed customizing my avatar. Seeing her as the kind of sarcastic, just-go-with-it type, I’d generally wear similar clothing to the factions I was in. Sometimes I’d wear a superhero costume. Or an awesome light-blue sweater and yellow knee-length skirt combo that really seemed to match her vibe. I just made whatever character I wanted. The clothing options aren’t set to specific sexes either, you can wear whatever you want on whatever type of character you want. You can change sexes, skin-tones, or builds at any time — allowing you true freedom of expression that most games don’t offer.

Sunset Overdrive also has a multiplayer mode called Chaos Squad that allows you and up to seven other people engage in various activities in the open world. You’ll travel to each mission location with your group (the first person there gets bonus points, so it tends to be a race in and of itself). Once in the missions, you will have a variety of different tasks to accomplish, each one giving you more Chaos for the final mission where you hold out against increasing waves of OD in a horde-mode equivalent. It is a sort of fun mode that accurately capitalizes on the great parts of the movement and combat, but also doesn’t seem to scale to the player count. Two players or eight players still seem to get the same onslaught of OD in that final battle, and the amount of buffs and traps you get to defend the area are reliant on how well you do in the missions proceeding it.

Insomniac clearly wanted to make Sunset Overdrive. It exudes so much personality and style, it’s hard not to be infected by it. The freedom of mobility in the open world and the fun combat more than make up for Sunset Overdrive’s insistence on being funny in every single moment. Sometimes it does actually manage to get some laughs, which is a nice bonus. The world is vibrant and beautiful with a huge draw distance and unique architecture. Character customization is incredibly progressive and notably appreciated. This punk rock apocalypse may try a little too hard, but that’s all background noise to a really entertaining game with excellent maneuverability.