Call of Duty: Advanced Warfare is perhaps the most confident Call of Duty game since Modern Warfare. Its campaign isn’t afraid to try new things and tell a more complete (albeit bonkers) story. Its multiplayer challenges the patterns and play styles that have become commonplace. Advanced Warfare is bolder than most of its predecessors and competently puts recent releases like Ghosts and Black Ops II in its own shadow. I’m as surprised as you are.

The exo-suit fundamentally changes movement for the series. Now you can make quick dashes in the four cardinal directions and double jump over obstacles. It pushes you out from behind corners and cover and gives you the tools to go heavy on the offensive. In just a few swift motions you can sideways dash out of a doorway, run a few steps, double jump, and slam down onto some enemies sitting behind cover — you have a veritable butt stomp attack in a Call of Duty game.

These exo-suits give you a freedom of movement Call of Duty seemed to lack. If someone is shooting at you, swiftly dash out of their fire. The exo-suits only allow two dashes in quick succession before needing a (short) recharge, but the mobility you receive more than makes up for its necessary limits.

However, the exo-suit makes the least noticeable impact to the campaign. Each mission gives you a different exo-suit with unique abilities, but shockingly few of them allow for the full range of movement — most missions don’t give you the double jump ability, and the few that do generally don’t make much use of it. 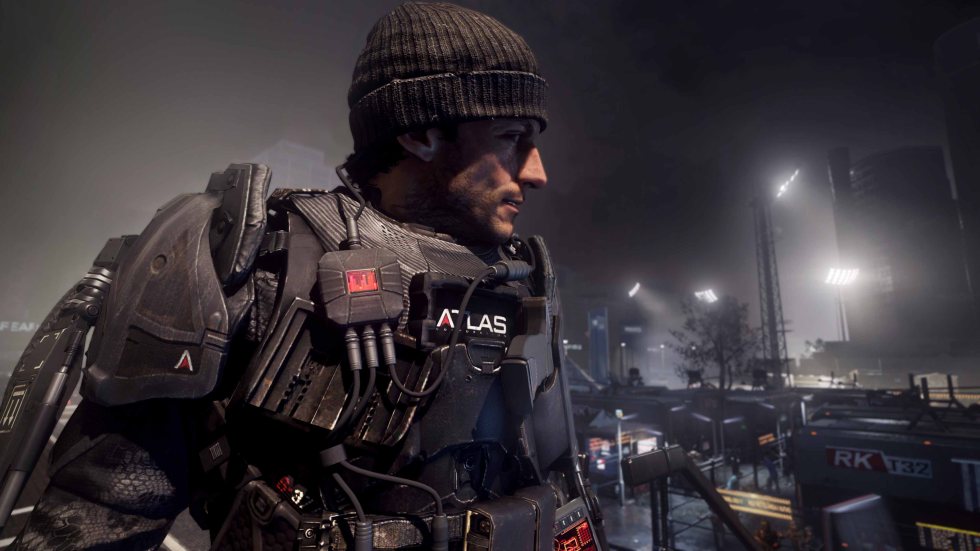 The campaign is your standard Call of Duty fare, only more confident and tightly paced than recent iterations (with some very impressive visuals as well, especially the highly detailed and emotive faces). You play as Mitchell, a gung-ho marine who joins a private military company called Atlas after losing an arm and a friend in the marines. The head of Atlas, Jonathan Irons (played by Kevin Spacey being exactly as Kevin Spacey as he can be), rises in power after the world’s militaries lack the necessary skills and funding to stop a terrorist from destroying millions of lives. And in true summer blockbuster movie fashion, exactly what you think will happen happens as Irons lusts for greater power.

It is the sort of story that never tries too hard to be anything it isn’t, but Sledgehammer isn’t afraid to give the campaign the necessary breathing room it needs. For the first time in a number of years a Call of Duty campaign isn’t going full throttle from start to finish, Advanced Warfare knows when to slow down. Most missions have a better sense of pacing than other iterations, starting off slow and methodical.

They give you a chance to understand why you’re doing what you’re doing before blowing the lid off of everything. One mission acts as a spy reconnaissance operation before busting out into a high-speed chase to nab a terrorist. An early mission gives you a lengthy walk through the Atlas PMC base and introduces you to major characters in the story — it’s an effective way to showcase the narrative and gives you a chance to ease into things before it goes off the wall. And it will, there’s no doubt about that. Advanced Warfare isn’t afraid to bring it down a notch, which leads to better storytelling overall. The story is entirely predictable but also relatively engaging — better than anything I can say for Ghosts.

For the first time in seemingly years, Call of Duty multiplayer gets a necessary shot in the arm. Exo-suits and changes to the create a class system (which shifts every year) create a much more fluid and robust multiplayer offering. Guns are still unlocked in a linear progression based on your level, one of the more needless holdovers from past iterations. Advanced Warfare changes the “pick 10” system from Black Ops II to a “pick 13” system, offering players more choices in creating custom classes suited to individual play styles. It may seem a small change on paper, just three additional items, but these can have large changes to the amount of attachments on your weapons or the perks you receive.

Multiplayer also offers a more robust avatar customization than in previous iterations. You can choose between a male or female soldier and outfit them with different gear pieces. These are entirely cosmetic additions to your character. You gain new pieces of gear through supply drops, little chests of various rarities that offer cosmetic gear or augmented weapons. Most of these items are largely superfluous and unnecessary, but they give a little bit of envy for players who see that cool looking gold-plated exo-suit and really want one. 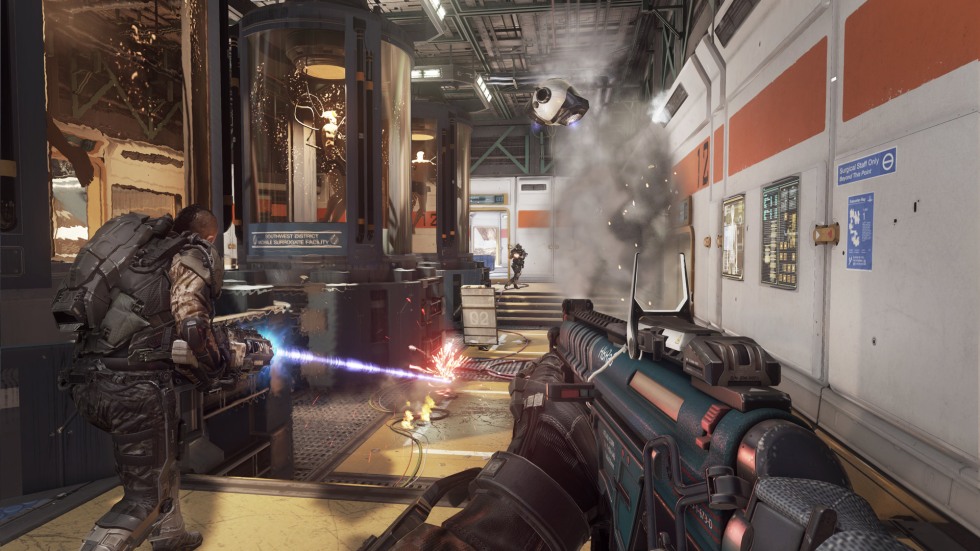 Exo-suits have changed multiplayer in drastic and welcome ways. All players have the ability to double jump and boost around with their exo-suits. It creates a more dynamic and frenzied battleground. It changes the flow of matches to keep things constantly moving. Campers are no longer as fruitful in matches because exo-suits allow for such a free-range of movement. And staying still isn’t nearly as fun as someone offering you covering fire as you double jump over some enemies and slam down on top of them. Or boost dashing into a slide around a corner to take out some guys trying to capture a point. Exo-suits change the static strategies and styles of play and give Call of Duty something fresh again.

One of the new modes, Uplink, keeps things constantly moving throughout the entire match. You’re tasked to get a ball into the other team’s goal and stop them from getting it in yours, a more fast-paced capture the flag variant. Unlike in most capture the flag modes, you have the ability to throw the ball, allowing you to pass it to your teammates or toss it clear from an opposing group that have surrounded you. Dunking the ball into the goal nets you two points, while throwing it into the goal is just one. It’s a highly enjoyable mode that makes excellent use of the exo-suit mobility.

In addition to multiplayer, Advanced Warfare also offers a four-player cooperative mode called Exo-Survival where you face off against waves of increasingly difficult enemies. After each round you are given a number of upgrade points you can use to outfit yourself with better weapons or damage reduction. It’s a fun mode to spend some time with friends, mindlessly taking out waves of less-than-competent AI. As the waves get more difficult, you start employing strategies and holding points. Each wave also has a side mission that forces you out of your comfort zone so you aren’t just sticking to the same position all the time. Exo-Survival isn’t as inventive as the Zombies mode from the Treyarch games, but it offers up a competent alternative.

Call of Duty: Advanced Warfare has given the series a necessary booster shot of originality and changes to the formula. Those burned by recent lackluster iterations will find much to love in Advanced Warfare, but it won’t bring many newcomers to the series. Advanced Warfare is the best Call of Duty since the original Black Ops back in 2010. It is bold and not afraid to challenge the norms of the series. The campaign has more going on than most Call of Duty campaigns and the multiplayer actually has some staying power. Mobility changed the game; let’s hope this series can continue to adapt and make necessary changes so we don’t have to play another Ghosts.

Note: Call of Duty: Advanced Warfare was reviewed using a retail PS4 copy provided by Activision. This fact in no way shapes the opinions of the reviewer.